Pleased to say my radiotherapy treatment ended on the 15th March. There were no imediate side effects but since than a lot of fatigue has crept in. Had a couple of days of pain which my GP said was fibrosis caused by the internal healing process.

They are not going to scan me until June 25th so its going to be a long wait to find out if its been succesful.

On Friday I had the first session of radiotherapy and it all seemed straightforward.

As the title says it was the first of 20 sessions so its early days yet but no side effects as yet. I have been told to expect extreme tiredness, change in appetite but most worrying is acute diahorea. However they do say tht these problems do not apply to everybody so with any luck I will avoid it. The way my luck is though I will get the lot many times over.

I feel rather downhearted today as my football team Brighton lost 6-1 to Liverpool. In some ways I was expecting to lose but hoped against hope that we could pull something out of the bag but it was a disaster!

of course it is..silly me!

Anyway I had an appointment at the Royal Marsden yesterday. I have completed the 6 months of the trial chemotherapy and despite a few hic ups on the journey all is well.

I am pleased to say that everything is stable. As for the future I am going to have a course of radiotherapy to ensure that the tumour stays stable, have to see a different consultant to discuss how things are going to progress.

Still I suppose its better than snow!

This time next week it will be about one and a half hours away from Christmas Day, another year has just flown by!!

I do not intend writing a 'review of the year' as I have always believed that the past has to be respected and the future looked forward to.

So what will 2012 bring? I hope lots of good things for you all but for me I hope my health improves and that a lot of personal things improve. I suppose the highlight of the year must be the London Olympics although that means a lot of work at work (does that make sense?). We are not allowed any leave during the Olympic period. On the subject of the Olympics I have a ticket for the cycling event for the last time the Olympics were held in London in 1948, this belonged to my father who was an ardent cyclist himself.

Otherwise I hope 2012 brings you good health and fortune.

As a professional railwayman my thoughts and prayers go out to the ticket inspector on the Southend line who was stabbed in the back by someone avoiding apaying a fare. Words fail me about the attitude of people who do this kind of thing. About 20 years ago I was on the wrong end of a 14 inch carving knife, fortunately his aim was not good! Even so the thought is always in my mind.

Today I reached the age of 60 and its been interesting looking back at some things in my life.

My father died 50 years ago in 1961 when I was 9 and in those days there was not the back ups in place that there is now and my Mother had to go out to work to support us and at times it was tough for her to work, run a home and look after my brother and myself but she managed it. Even so I have to say I had a happy childhood, we were always warm and well fed even though at times I know my mother struggled to make ends meet. Sadly she died in 1997 but if she can read this I just want to say one thing, THANK YOU.

School life was pretty normal and like any self respecting school boy I got up to the usual japes. One I will briefly mention is that part of the school cross country run was part of the route used by the local council refuse lorries going to the tip and many is the time that they went up the road with a group of school boys hanging on the back! Anyone who knows me now will probably find it strange that I always enjoyed cross country running, it would probably kill me now!

In September 1968 I joined what was than the South Eastern Division of the Southern Region of British Rail. At the time I did not realise it but joining the railway was like gaining a second family. Over the years I have worked my way up from working at station level to my present job of Internal Auditor. On my way I have made lots of lifelong friends. In fact the rail industry has always supported each other and looked after there own. Staff are keen supporters of charity and support our own old peoples home, Dr Barnados, several local hospices and a charity called The Railway Children which supports underprivileged children. I feel very honoured to have worked for such an organisation for over 40 years and the support I have had with my health problems has been fantastic.

In June 1990 my daughter was born and added a new element to my life, she has progressed through the education system and is now in her second year at Hull Medical School = one proud Dad!

In December 1998 my life was brought to a sudden halt when I was diagnosed with Non Hodgkins Lymphoma something which I have been fighting ever since. In May 2009 I was told that I only had months to live which caused me much distress. I read an article in a newspaper the other day which said that the life expectancy of people diagnosed with Non Hodgkins was 520 weeks, thats 10 years in old money. However 12 years on I am still here but I must admit to having some very black moments at times and believe you 3 in the morning is a very lonely time and many is the time I have wondered if I am on borrowed time. I would like to say a special thank you a very special friend whose love and support has and still does mean an awful lot to me.

As to the future - well I do not think I will be around for another 60 years but I have no intention of giving up the fight, and one chapter and book will be closed and another one will start.

Have just come back from the Royal Marsden Hospital with the results of the latest scan. I am pleased to say that the tumour has not spread but more importantly there is no evidence of any new tumours.

I find the weather at the moment incredible. Its my birthday next week (my 60th yes I am getting old!) and this time last year we were walking through snow. This year it seems that November will be the warmest on record and December seems to be going to follow the same pattern. 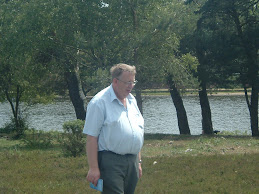